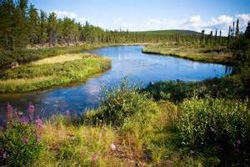 Most financial institutions now require that a Phase I Environmental Site Assessment be conducted on Commercial Properties where a mortgage or other financing is required. How up-to-date the site Assessment must be varies with each banking institution, although the trend is to require studies no more than one or two years old.

John has been involved in Environmental Assessments in a broader picture as a Wildlife Biologist since 1973. He has participated in Environmental Impact Assessments (EIA's) for new mines, roads, transmission lines, pipelines and hydro developments in Saskatchewan, Alberta, NWT and British Columbia. He has also conducted work on new parks and human/animal conflict issues in Saskatchewan.

Click below to learn more about community service work John Polson is involved in!

Polson Environmental has been involved with the Wildlife Rescue and Rehabilitation Society of Saskatchewan (WRSOS) for three years. WRSOS provides wildlife education and operates a Wildlife Hotline from 9 AM to 9PM 365 days of the year. WRSOS also works with rehabilitation centres and participating veterinarians throughout Saskatchewan. Residents of Saskatchewan can phone the Hotline with wildlife questions or to report situations where birds, mammals, amphibians, or reptiles require assistance. Hotline volunteers provide advice to callers and when required, direct them to appropriate agencies rescuers or wildlife rehabilitators.

Principals of Polson Environmental have acted as wildlife rescuers with WRSOS. John, a practicing Wildlife Biologist since 1973, and his wife, Alverta have provided rescue services for a wide range of species. In particular, they have rescued ducks in Saskatoon and surrounding areas. Wild ducks, particularly Mallards, have taken to nestling throughout Saskatoon and other large cities in the province. This problem has increased as new developments encroach on their habitat. When the young ducklings hatch, traffic, fences, other obstacles and predators significantly challenge their survival. A major portion of calls to the hotline from late May to late July are regarding ducks in distress. In 2014, Polson Environmental responded to a large number of calls resulting in the rescue of 65 female ducks and over 500 ducklings. The female was captured along with her ducklings and then relocated to a suitable habitat outside the City. Many orphan ducklings were also picked up as a result of calls to the Hotline. These were taken to the Living Sky Rehabilitation Centre in Saskatoon. Many of these were later returned to the wild by placing them with other mothers with small broods of ducklings.

In addition to the duck rescue calls, Polson Environmental has responded to numerous other calls including a wide variety of hawks, a Boreal Owl in Yorkton, a Saw-whet Owl on the east side of Saskatoon, a Great Horned Owl trapped in a grain cleaner the PrudHomme area, grebes, geese, and orphaned songbirds.

For more information on WRSOS or the Living Sky Rehabilitation Center in Saskatoon, see https://wrsos.org/.

WRSOS also works with other rehabilitation Centres in Saskatoon as well as target veterinarians.